Quran is the best blessing of Allah which He bestowed upon humankind. On recitation of each word of the Holy Quran, there is a reward for it. Some Surahs hold recompense superior as compared to others. Surah Yasin is amongst the most revered Surah of Holy Quran. Everything has a heart and the heart of Quran is Surah Yasin. The heart is considered the most important organ. It supplies the entire body with blood to keep us functioning. Without the heart, the body cannot live. Reading Surah Yaseen comes with many benefits which true believers must not miss out on. Our beloved Prophet Muhammad PBUH said:

“Surely, everything has a heart, and the heart of Quran is Yaseen. I would like that it be be in the heart of every believer of my ummah.”

Surah Yaseen is the 36th Surah of the Quran. The meaning of the word “Yaseen,” is unknown. Although many meanings have been suggested, it is Allah who knows best. It warns those who refuse to believe in God and mock God. It emphasizes the Quran as coming from a divine source.

Blessing is so the Heart that will Memorize Surah Yasin

If a person recites Surah Yasin before sleeping at night, then he will wake up free of sin at morning. Prophet Muhammad PBUH said:

Read Surah Yaseen at every beginning and end of every day, daily, to have your prayers answered.

Whoever reads Surah Yaseen, Allah rewards him that is equal to that of reading the whole Quran.” Reference: Tirmidhi 2812/A

Recite Surah Yasin Near The Person Who Was To Dye

Surah Yasin is recommended to be recited close to the dying person. A man who is leaving this world needs spiritual help. Surah Yasin helps the diminishing soul and brings peace and comfort to the excruciating process. Prophet Muhammad PBUH said:

“Recite Yaseen on those who are dying.” Reference: Sanan Abi Dawud. According to one hadith, if anyone recites Surah Yaseen every night and then dies, they will die as a shaheed.

If you need complete support from Allah, try making a habit of reciting Surah Yaseen at Fajr Namaz. The Prophet Muhammad PBUH stated:

“Whoever reads Surah Yaseen at the beginning of the day, all his needs for that day would be fulfilled.”

If Surah Yaseen is read by one who fears the ruler or an enemy, one gets rid of this fear. 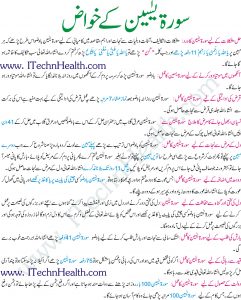 Sura Yaseen is a very blessed Sura which has many virtues and benefits in it. Some of these are:-

How To Lose Weight