Women Heart Attack Symptoms can be differ on the base of following seven possible reasons. These could be dangerous, so don’t ignore and if you have feel any of such symptoms, then immediately contact heart specialist near from you.

7 possible women heart attack symptoms which could be dangerous is as under;

Some of people have extra sweat issue. Recent search will also declare extra sweat as possible heart attack symptom in women. Always remember that heart’s work in body is just like a mechanical pump.

We cannot ignore vomiting because in major cases of blood clot heart attack, vomiting occurs. So, if vomiting is not due to stomach or any other issue then ignorance of vomiting could be dangerous with respect to heart attack.

Breathing and heart attack have amazing connection between them. In majority of heart attack cases, women feels difficulties while breathing. They just unable to breathe normal because of chest pain.

It has been observed that before one month of heart attack, its patient have less sleep. If you are facing issue like less sleep, try to know actual reason behind this. After that you can analyze that less sleep is due to Women Heart Attack Symptoms or not.

Ups and downs are the part of life. Try to be happy in your life, even if you failed to get success in life. Just think about people who are living without basic necessities of life. Habit like always be happy will make your heart more healthy. 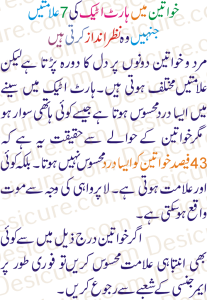 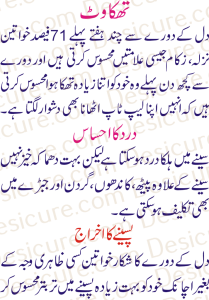 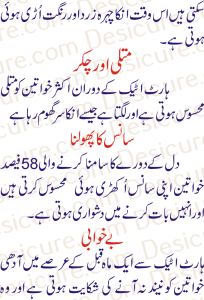 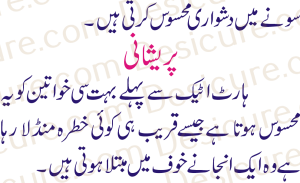 Treatment of Hole in Heart without Heart Surgery

How To Reduce Cholesterol Ka Ilaj

About admin 1496 Articles
Please feel free to contact us or send your comments. [email protected]