Snapchat took everyone by surprise when they announced Spectacles, glasses that can record up to 10-30 Second videos and upload them to a user’s Snapchat account.  The product, which looks a lot like a pair of regular sunglasses, first showed up in a video leaked by Business Insider, and Snapchat was quick to confirm that the rumor was real.

Snapchat glasses record video using a built-in camera, by default a recording session lasts 10 seconds, but you can extend this again with another tap. The longest possible recording is 30 seconds. Spectacles look fun and friendly.  The Spectacles battery life runs for a day.

Spectacles cost $130 and contain a 115-degree lens, the new product from Snap, Inc. will come in three colors: black, teal and orange. Users of Spectacle will be able to either store snaps on their glasses or transfer them to their accompanying Snapchat account either via Wi-Fi for Android devices or via a bluetooth connection from the glasses 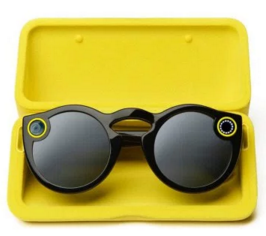 Snapchat glasses record video using a built-in camera. This is in a new circular video format that you can view in any orientation. Spectacles is designed to record 10-30 second videos captured with a fish-eye lens. Just tap a button near the glasses’ hinge and you can start recording. When you record a light inside the Snapchat Spectacles shows you that you are recording and there is an exterior light so others know you are recording.

Here you can see how to record videos with snap chat.

About admin 1335 Articles
Please feel free to contact us or send your comments. [email protected]