Whether you are owner of a small or a large business, student, software engineer, Doctor are intent to playing games then these days you must have a cheap laptop. Today I am going to list out the best laptop for business, cheap new laptop computers, high performance laptops, Reading this article at the end will help you to find what is a good inexpensive or cheap new laptop computers that meet your requirement.

Most laptops today are powered by an Intel CPU, with a just handful of lower-cost models using one of AMD’s processors. Even though most of the chips come from one company, there are more than two dozen different models you might see featured in a brand new notebook. Fortunately, learning the basics isn’t too difficult.

Every 12 to 18 months, Intel releases a new processor generation, which is always a bit faster and more power-efficient than its predecessor.

If you’re looking at a laptop that costs between $200 and $400, there’s a good chance it has an Intel Celeron or Pentium series CPU. These budget-minded processors deliver performance that’s just good enough for web surfing, email and light productivity. Celeron chips are very common in Chromebooks, because Google’s browser-based OS doesn’t require as much horsepower as Windows.  If you’re buying a Windows laptop, get one with Celeron / Pentium only if price is a primary concern.

Celeron CPUs have TDPs ranging from 4 to 15 watts. Celeron model names that begin with N (ex: N3060) use 4 to 6 watts while those that end in U (ex: 3855U) take 15 watts and promise better performance. Battery life varies a great deal, depending on the battery capacity of the system, but systems with the 4 and 6-watt chips tend to be cheaper and longer lasting. Some Celerons and Pentiums are dual-core and others are quad-core.

AMD’s FX and A-series CPUs are often found in low cost, bargain bin laptops where performance hasn’t been a priority. That may change soon. AMD has just launched its new Ryzen series of CPUs.

The first batch are the Ryzen 7 1700 and Ryzen 1700X and Ryzen 1800X, which are all desktop chips that are competing with Intel’s Core i7 line. Ryzen for laptops should be launching in the second half of 2017.

For the very highest-end mobile workstations, there’s Intel’s Xeon E3 processor. Laptops with this processor inside are capable of doing more calculations so they can develop 3D animations or run complex simulations for someone like a medical researcher or an engineer. Xeon E3 processors have a 45-watt TDP, four physical cores and come with both hyper threading and turbo boost. Don’t expect great battery life or low prices.

If you’re a power user or gamer, a laptop with an HQ processor is probably your best choice. HQ Series processors have four cores, instead of the two. The Core i7 units can actually have 8 concurrent threads. HQ processors also have a TDP of 45 watts, which means that the laptops holding them are either going to have poor battery life or giant batteries. Because they generate more heat you won’t find HQ CPUs in super-light or thin laptops. 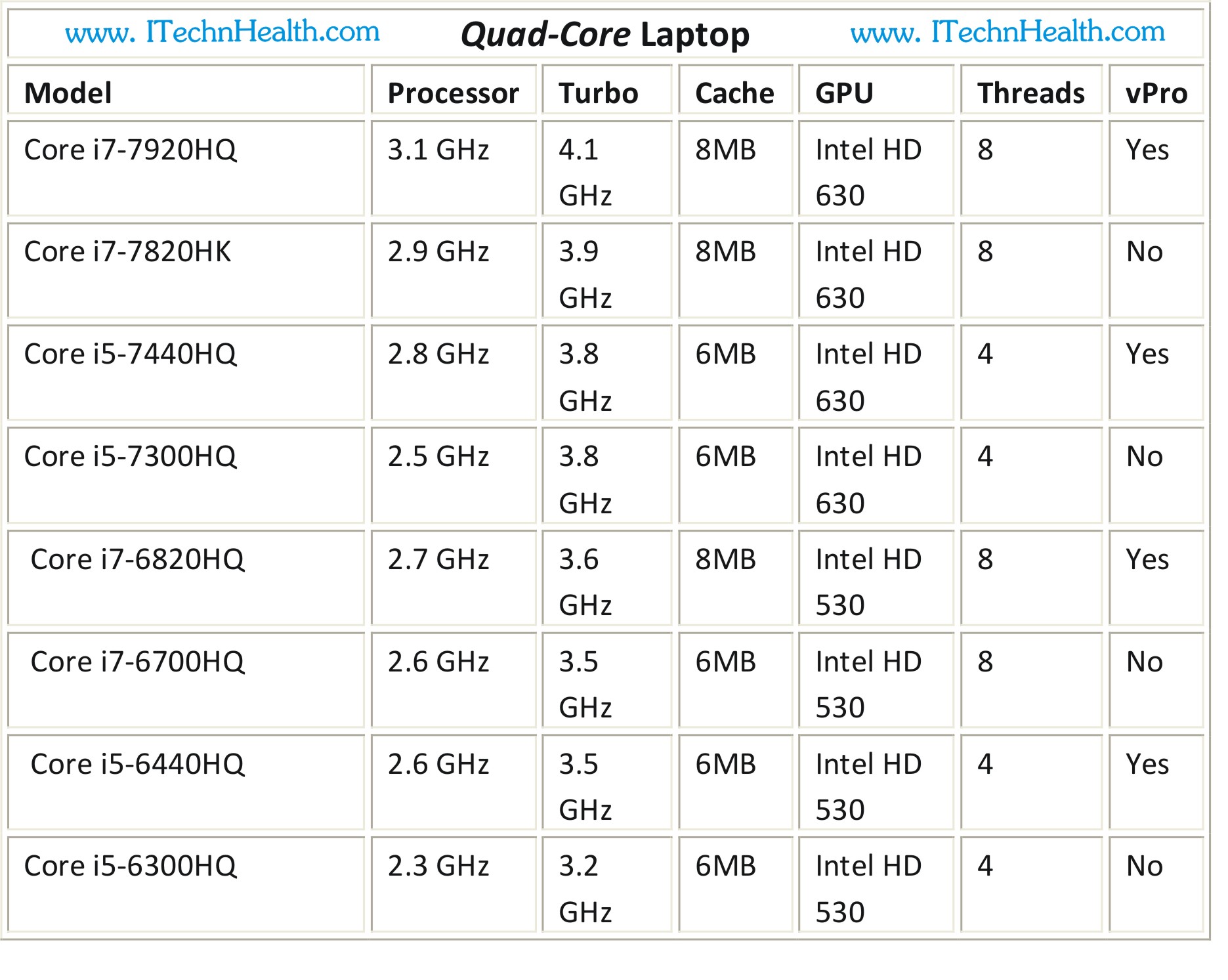 One of the smallest laptops with an HQ processor is Lenovo’s Think Pad T460p, which has a 14-inch screen and tips the scales at 3.8 pounds. With its 3-cell battery, the T460p taps out after a very-short 3 hours and 18 minutes, but that time grows to 9:57 with the 6-cell battery on board.

Intel just launched the 7th Gen versions of its HQ and HK processors in early January 2017, so right now, most quad-core laptops are still on the 6th generation.

Intel is serving laptop market with its powerful range of processors since very long time. Intel processor laptops are not only best in terms of performance but they are budget friendly as well. Among all of them Intel i5 Processor laptops are best affordable high performance machines which will let you perform almost all types of tasks. So to help you out in buying best i5 laptop, I have got here list of top 10 best i5 processor laptops which includes best Intel Core i5 laptops, notebooks, 2-in-1s and also gaming laptops…

Well if you have made your mind to buy the Intel i5 processor laptop only, then here are some of the top picks from a wide array of options available when it comes to buy the best i5 laptop.

Things to Remember Before Buying a Laptop

It’s important to remember, though, that the CPU is not the only determinant of performance in a laptop and that even the slowest CPUs can provide a decent user experience when paired with other good components. For most people, picking a Solid State Drive over a hard drive will make their computers a lot more responsive than paying extra to get a Core i7 Core i5. And for graphics performance, having a powerful discrete GPU (graphics processing unit) is even more important than having the fastest CPU.